What childhood dream is still present in your daily life? 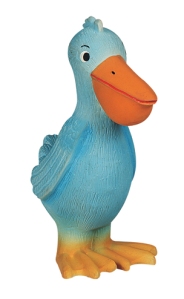 When I was a child, I remember watching an animated childrensprogram on tv. It was about a pelican with a big mouth. Whenever there was a problem, he carried everything he needed in his beak. I found this a facinating thought and decided to create something alike. From a carton box I built sort of a robotsuit for myself, with my arms sticking out. In the suit I would put all kinds of handy stuff to carry with me, like scissors, tape, rope, pens, paper, extra cloths, something to eat, etc. I felt I could deal with every possible situation that would occur and that felt very good (ignoring the fact that walking around in a box looks a bit silly).

In high school I bought my first hiking backpack, and often it was just standing in my room, packed and ready to go. When I was 17, I made my first independent of my parents trip with my cousin, to France & Spain. This went very well and a year later we went to Egypt and Israël. Since then, I loved to travel with my backpack, sometimes for months at a time. Everything I needed was in my backpack, and that felt good. 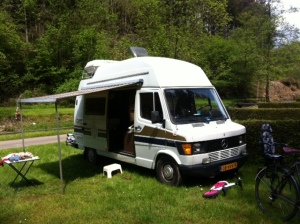 A couple of years ago I bought my dreamcar, an old Mercedes Campervan (1983). In it, two double beds (after doing some rearranging), a little fridge, cooking possibility, even a small toilet/shower space, lots of little cupboards to put in my handy stuff and clothing in, and best of all, I can drive it to wherever I like. Eventhough I bump my head regularly, it is very small livingspace for 3 people (my family) and the car starts to seriously show rusty signes of old age…I feel totally happy with it. I can carry around all the stuff that I need to deal with every possible situation…like my childhood cartonrobotbox.

What childhooddream is still present in your daily life?

6 responses to “What childhood dream is still present in your daily life?”